We are excited to be a part of the Holistic Holiday at Sea vegan cruise for the third year in a row!  This seven-day cruise program caters delicious vegan and macrobiotic meals to guests relaxing and having fun in the sun.  The cruise features distinguished speakers, such as research scientists and physicians T. Colin Campbell, Neal Barnard, Caldwell Esselstyn, Deepak Chopra, Christina Pirello and Jessica Porter.  This year’s cruise sets sail March 1st from Miami, Florida and heads to St. Martin, San Juan, Puerto Rico and the Bahamas.

Natural Epicurean graduate Jeanine Perla will be joining the cruise once again, this time with Natural Epicurean externs Kellly Ritter and Dustin Lundewall. They will join the kitchen staff in preparing meals for the thousands of ship guests. It is destined to be a life-changing and rewarding learning experience for everyone involved.

Last year the Natural Epicurean awarded Mark Griffard a full gratis attendance to our Macrobiotics modular program. We are offering the same again this year, as well as a few bonus giveaways, including  three $500 scholarships for a modular program to be selected by the winner!

We look forward to hearing all about our students’ experiences and are thrilled to once again be a part of the Holistic Holiday at Sea experience. 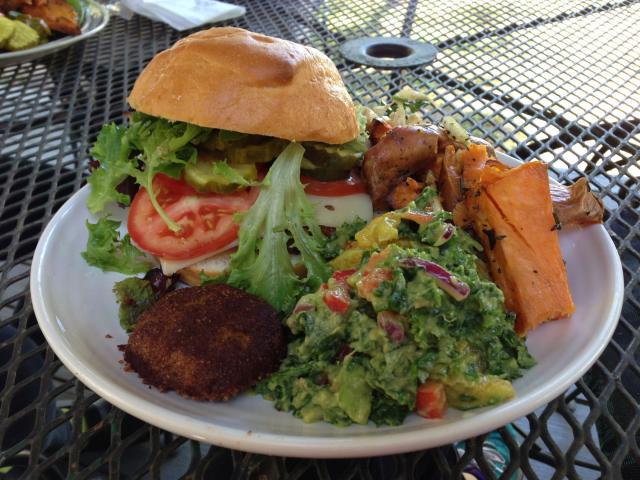 This past weekend, I had the privilege of leading a catering team with Natural Epicurean alumni, Julia Grueskin and Angie Smith. We were preparing and providing food for sixty aspiring Kundalini Teachers at the Yoga Yoga Teacher Training retreat. The three-day event was held at the beautiful and tranquil Margaret Austin Center in Chappel Hill, TX. As a graduate and current employee at The Natural Epicurean, I knew that with the help of my brilliant team, we would be able to create a dynamic and delicious food menu.

I ordered the freshest ingredients to pack up for a weekend of feeding Austin’s newest Yogis. The order arrived on Thursday, the day before the retreat. It consisted of over 20 boxes of fresh produce: Dry grains, spices, milks, ghee and an assortment of interesting ingredients that I had chosen for the diverse menu. I loaded my car and started my Friday early. I transported all the food to the retreat center and started to set up the kitchen.

As my team arrived, we began to prepare Friday night’s menu: Southwest Caesar Salad, Roasted Zucchini, Peppers, Portobello, Mexican Rice, Enchilada Casserole and Chocolate Avocado Mousse for dessert. It felt a little rushed, but we managed to pull everything out of the oven just in time for dinner. After we cleaned up the kitchen, we organized the boxes for the next meals, dividing the ingredients so that all we had to do when prepping the dishes was pull the appropriate box.

After a rough night’s sleep, with my mind chattering, I woke up early to start breakfast and get a head start on lunch. Breakfast was easy, the only cooked dish being Millet Porridge. We served this alongside fresh fruits, yogurt, granola, and a spread of breads, jams, nut butters and other condiments.

By the time the yogis came in for breakfast, we were mostly done preparing lunch. We served a lunch of Green Salad with Pecans, Cranberries, Lemon Dressing, Chickpea “Chicken” Salad, Ginger-Miso Baked Summer Squash, Barley Sweet Vegetable Soup, Almond Butter and Jelly Bars. This meal was inspired by the Macrobiotics modality at The Natural Epicurean, with lots of greens, a nourishing soup, and healing ingredients such as miso. When lunch was finished, we took a little time to ourselves before jumping into preparing the dinner menu.

Once we reconvened, it was time to get down to business. The theme for this meal was Indian food, and many of the recipes were styled after Ayurvedic cuisine. We put together a Kale and Currant Salad with Lemon-Miso Dressing, a Rice Pilaf, Spinach Dal, Squash Curry, and Apple-Raisin Chutney, all served alongside flatbread. For dessert we rolled together one of my favorites, Almond-Cardamom Ladoos, made with almond butter, almond flour, cardamom, and dried cranberries. Later in the evening, we prepared Golden Milk for all the yogis as their bedtime treat.

Sunday morning we went right to work. I started the pancakes as soon as I got in the kitchen, since the griddle was much smaller than I anticipated. I was only able to cook six pancakes at a time, but by the time the guests arrived for breakfast, I had enough for everyone. Making lunch was tighter than expected. The veggie burgers were made the night before and were ready to be baked, but most of our dishes required the use of ovens. We baked cookies before breakfast was served, and right after breakfast we started roasting more vegetables in the oven while putting together the salad and preparing the rest of the ingredients. Once the roasted veggies were out, we put in our sweet potato fries and saved the veggie burgers for last so they would still be warm and crisp for lunch. I pulled the last batch out as the guests began to arrive. Our last meal consisted of Roasted Cauliflower with Raisins and Vinaigrette, Avocado-Kale Salad, Sweet Potato Wedges, Black-Eyed Pea and Oat Burgers with a Vegan Chipotle Mayo, and Pumpkin Cookies for dessert.

After a long three days of cooking, I was very pleased with how each meal turned out, and the compliments we received were fulfilling and inspiring. The responses seemed to indicate that we kept outdoing ourselves and we were told over and over that each meal was better than the last. Because of all the different dietary preferences, I kept all the meals vegan (with some options for non-vegan milks and ghee), and a majority of the dishes were gluten-free or had a gluten-free option. Overall, I felt the event was a great way for me to showcase my talent and the knowledge I have gained through The Natural Epicurean. A big thank you to Yoga Yoga for the opportunity, my team members for their hard-work and priceless suggestions, and my co-workers for the support. I look forward tocooking again in the future!

Feeling irritable? Flighty? Sluggish? If you are experiencing a change in attitude or being, your doshas may be out of balance. Doshas are a staple concept in Ayurvedic healing cuisine, which teaches us that the world and … END_OF_DOCUMENT_TOKEN_TO_BE_REPLACED

by Maria Praeg, Natural Epicurean Alumni I am sure most of us know that using herbs in our everyday culinary repertoire is not only delicious and adds much variety in flavour and texture but that the regular usage of herbs … END_OF_DOCUMENT_TOKEN_TO_BE_REPLACED

There are no upcoming events at this time.